If you want to have your very own AS/400, the first step is to acquire one. New machines with the accompanying OS/400 license are expensive. Unless you recently won a lottery jackpot, you might want to look for older machines.

There's no known emulation of the AS/400 platform on common platforms available. Virtualization of the OS is available, though. But only on IBM hardware, starting with POWER5 CPUs.

As I pointed out in The Naming of the System, the main differences between older and newer systems are mostly hardware based and not software based. Of course, newer OS releases have more features but I'm questioning their significance for a rookie regarding AS/400.

Facts to keep in mind when deciding that machine would be the right one for a beginner:

Newer hardware with LPAR support is inherently complex to set up and configure. You probably need a Hardware Management Console for proper configuration of LPARs and IPL parameters, and for easy access to a Console. Ethernet ports are virtual and can be used by IBM i lines and probably by DST as a LAN console attachment. Which port corresponds to which entity in IBM i? I got multiple headaches when fighting with a 8203-E4A to get a grip onto how stuff works.

Older hardware is much simpler to set up. Twinax Console, Power, Probably LAN attachment, that's it. No virtualization means that physical ports have exactly one logical resource in OS/400.

Older machines from pre 2000 need most power for spinning their hard disks. You can add 10..12 W of power for every 3,5"-Disk. Depending on model and how much stuff is in there, you can calculate between 80..400 W for a machine.

Every expansion card needs power to operate, even if it is not used. The more cards, the more power. It's usually safe to wade out cards one doesn't need. Some boxes had multiple modems attached to dedicated serial ports. Get rid of them.
It is possible that older machines (with SPD-Slots instead of PCI) request a new system password when the hardware configuration changes. To my knowledge, this password can be calculated by IBM only by providing some output of hardware inventory to IBM. Your mileage may vary.

Especially power hungry by comparison are integrated PC servers. These are cards that have an INTeL-CPU and dedicated RAM. These allow you to run Netware or Windows directly from virtual disk files on the AS/400 disks. Especially if not in use, these cards draw a good deal of power, because the CPU doesn't get HALT instructions for power saving.[1] E. g. 2850-011-Adapter: Pentium II@333MHz with 128 MB RAM sucks about 20 W extra power from the power supply.

Oh, and: The AS/400 greatly benefits from having many disks. Data is cut into pieces and scattered over all available disks, just like RAID 0.

Okay, you want to have a big box, because you like it fast. You plan to boot when you decide to tinker around and shut it down when you're done. Drawback is that those machines take awful long to boot. I'm talking about 5..15 Minutes or more, if the system was powered off without proper shutdown. Keep in mind that you probably don't tinker around as much as you intent, because booting the box for just a short test isn't worthwhile the investment in patience. Proper shutdown also takes several minutes.

Think twice. Maybe it's a better idea to have a slower box readily available when you're awake. Since it doesn't draw so much power, it doesn't hurt the pocket equally to have a big box running all the time. Besides that, AS/400s usually can be tasked on a very flexible way to power up and down to certain times on certain days.

Boot and shutdown are somewhat I/O intensive tasks. More disks make the box boot and shut down a bit faster.

Most older machines are surprisingly silent when initially powered on: Only the (few and huge) fans rotate. Disks will be started one by one by the service processor during the boot sequence.

Many disks of around the 2000s are slightly out of rotational balance, that is not a problem for their lifetime expectancy. But these usually produce audible hum between around 100..300 Hertz, depending on rotational speed of the disks in question. Add the audible beat effect resulting from tiny differences in rotational speed and you get a hum swelling louder and quieter. When the outer case of the box resonates with the disks' hum, the noise level could be easily multiplied. From my experience, this hum is way more annoying than the base noise from disk's motor trying to keep the platters rotating with nominal speed; with a slight increase in rattling noise when the disk actually positions its heads to read or write data.

If you're lucky you can tuck away the box in the basement and still have access via some kind of network connection. Best noise insulation though sheer distance.

Another considerable option is to buy adhesive bitumen mats and stick these to almost all flat areas of the inside of the case. This usually makes a huge difference.
I have a 9401-150 with three 2 GB disks with a slow spindle speed, maxbe 4500 RPM. The hum was not too annoying, but after applying bitumen mats to the case, the box is now so quiet, I easily could run it in the living room with only slight disturbance.

Often, companies throw away documentation, license keys, proof of ownership, OS install media and other stuff prior to the disposal of the machine itself. The machines usually are really heavy to lift and as long as the occupied space is not badly needed, they tend to stay.

Hard Disks are often formatted or even removed and scrapped onsite to prevent data leaks. This transforms the machine in question into a nearly useless blob of mainly steel.

Older OS install CD images can be acquired by asking nicely in proper USENET groups or web based forums revolving around AS/400. Newer releases can be downloaded as trial releases from the IBM Entitled Software Support pages after registering an IBM ID. But without license keys, you have 72 days from installation until the machine finally refuses to boot. Or to provide proper license keys that stops this timer. The other option is to reinstall the OS, with prior blanking of the disks to yield another 72 days. The LIC-keys are dependent on model, hardware serial number and possibly other factors. So, it's not as easy as searching for s3r14lz in h4ck3r'z sp4c3z.

Even if you manage to get a box with appropriate license keys and put in some SCSI disks, it just won't work. IBM utilizes disks with unusual sector size, and more fancy stuff. So you need to buy more expensive AS/400 compatible (used) hard disks to re-equip the box. This investment is not a big deal, though.

There are certain combinations of system type and OS version that just work indefinitely without entering any license keys. One such combination is a 9401-150 with OS/400 V4R5M0.

For the initial setup, troubleshooting and backup of the system, a console is needed. This equals to a 5250 terminal from IBM or equivalents from other manufacturers. Most companies who had AS/400 still have at least one of these in the basement: Because a console is important.

Every machine has a so called twinax controller either built-in or on a PCI card. The connector type is either DB-9F or DB-25F, on an addon card or at the box's case itself. Depends on model, thus age and how it was ordered back then. Another needed accessory is the so called twinax brick, a heavy plastic box with multiple twinax connectors and a cable with a fitting plug for the attachment to the twinax controller in the AS/400.
Older (CISC) machines might have twinax plugs directly attached to their case.

The twinax connectors on the brick have numbers, starting from 0. The console terminal is (in part) determined by attaching it to connector 0.

Every twinax terminal has a primary address[4] and probably a secondary address, for a second session or a locally attached parallel port printer. The console must have it's primary address set to 0.

Terminals don't utilize flash memory for storing settings. Usually there is a battery soldered to the logic board to allow NVRAM to retain it's information. If terminals lose their settings when not being powered on, it's very likely that this battery is drained and should be exchanged before it starts to leak corrosive chemicals, destroying the logic board of the terminal.

IBM states[5], Version 3 of OS/400 is „Y2k-enabled“ to different degrees in the minor releases of V3 with appropriate patches (PTFs) applied.

Depending on model, AS/400s can be huge. Keep this in mind when reaching out for the fast but cheap box. The coolness-factor of a full-blown 9406-890 with 32 POWER4 CPUs and 256 GiB of RAM is incredible. So are the power, noise, cooling, and space requirements. See Model 9406-870 and 9406-890 server specifications for the shocking details.

Mainboard of a model 150 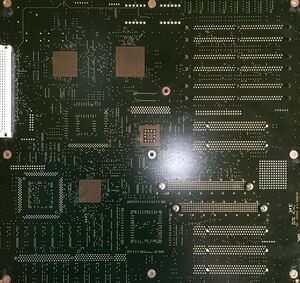 Mainboard of a model 150, backside