About Green Screens and mouse-clickable UIs

There are plenty of resources online in the web regarding this topic. It seems to be something religious, like the Editor War EMACS versus vi or vim.

Some people insist that character based UIs are hopelessly outdated and must be modernized. That usually[1] means: Apply some technology that hides the crude text UI behind a fancy web UI, running in any decent web browser.[2]
Others insist that point-'n-click-interfaces are a serious brake of true productivity. All this constant arm motion between mouse and keyboard does obviously lower the amount of information flowing back and forth between the user and the system: Arm moving overhead.[3]

Let me add a third party and then clean up the resulting mess. Unix/Linux[4] Sysadmins as well as Linux Power Users usually insist on using the shell, a character based UI in itself. It provides for the concatenation of simple tools to do tasks on files or data streams, or whole directory structures. This feature proved to be powerful for experienced users. Do a maximum of work with a minimum of effort.
These very same people see an (emulated) AS/400 screen and almost immediately the expected behavior kicks in: Old, outdated, legacy, you name it.

Seen from another point of view, the AS/400 is commonly perceived as ultimately boring. That is because the AS/400 is mostly running stuff considered boring (by geeks). Commercial IT at it's best[5]: Warehouse management, personnel administration, tracking account movements, to name a few. Stuff that makes sure civilisation as we know it won't collapse, because money stops flowing, carriage of goods ceases, personnel isn't directed to where needed.

Then, there are also some people who argue that by keeping the green screen alive, the perceived outdatedness of the system to others is even more increased. They emphasize that this is doing great harm to the IBM i platform at large, because all effort to convince people that it's not about green screens anymore, is negated. So, interestingly, they're not appalled against green screens because they don't like them themselves, but because they care about other people's perceptions over reasonable facts that green screens still have their use cases.[6]

The Best of both Worlds

Use the right tool for the task in front of you. This is a fundamental statement holding true for every task in computing[8] and is not restricted to Unix environments.

The AS/400 was created as a business aid. This comes down to efficient handling of structured data that has to be entered, processed, stored, reviewed and maybe printed. The system was designed to help people interact in a reasonably user friendly way with it with the then state of the art technology: Character based interfaces utilizing a Keyboard for command and data input, and a CRT Screen for immediate display of the system's responses.[9] But this doesn't automatically equate to a command line interface.

The AS/400 has a unique feature that distinguishes it from other character based systems, like Unix: The whole UI revolves mainly around forms and menus, accompanied by static text. The layouts of these screens are somewhat standardized. AS/400 screens are very recognizable because of this.

The classic AS/400 green screen consists of numbered menu items with an input line beneath. One may enter a number and press Enter to pick a menu choice. Or someone may enter a command with accompanying parameters into the same space, if one knows what to enter. If one doesn't know the exact parameters and allowed values of a command, a keypress of F4 invokes a full screen form for the requested command, aiding the user in choosing the right parameters for the desired action to be taken.

Sometimes, choosing a menu item reveals another menu. Sometimes a form with text input fields is displayed for the user to fill in needed parameters, so the command may be run with the desired outcome. Rarely no parameters are supported and the command just runs.

For every editable field on the screen, the user is allowed to place the cursor there and again press F4 to be presented with another screen, listing allowed values for this particular parameter.[10]

If this facility also fails to provide proper enlightenment, one may press F1 at any time to invoke a context-sensitive[11] help text, which is almost always surprisingly helpful[12]. See CL Tricks for an overview. These features are unique among text based UIs.

The ubiquitous command shell of Unix, Mac OS X, Windows and others is restricted to commands to be entered, together with (sometimes mandatory) parameters. Commands are entered into the last line of the terminal window. Output from commands appears over this line and scrolls to the top until it's out of sight[13].
Any help for a command's parameters must be invoked by separate facilities (e. g. invoking the command with a parameter to show an usually terse online help, or by reading Unix Man-Pages), and manually complete the command line by re-entering the needed command options.[14]

Concluding: The AS/400 is located somewhere in between GUI and CLI. As one might see now, intuitive user interfaces must not necessarily equate to being graphic (pixel-based).

Why still text, then?

Someone might object that if there's no operational difference between GUIs and AS/400 menus/forms regarding intuitive handling of the system, why does the modern AS/400 still lack a GUI? Well, only IBM can answer this question without making guesses. If I should make a guess, I'd say: Because it would be a change that 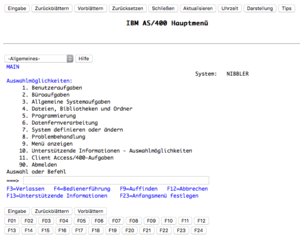 Main Menu shown in a browser's window through Workstation Gateway.

IBM tried to make the AS/400 more click'n'pointy. There is a facility called Workstation Gateway[16], translating AS/400 screen elements on the fly into their HTML counterpart, if existing. It basically works and it's clickable but it looks gross compared to modern standards: No icons, no color, no eye candy.

There's a program called Operations Navigator that comes as a Client Application, running (only) on Windows, providing graphical equivalents of some operating system commands/tasks. Some things (like the management of the integrated CIFS/SMB-Server) could be configured solely with OpNav but not with Green Screen commands and forms.[17]

Also, the Configuration of the IBM http server is done via Web Browser, and CGI-Programs running on the AS/400. Unfortunately, this facility is painfully slow, at least on a 150. Not exactly the best promotion for IBM, trying to convince programmers and system administrators to abandon text interfaces in favor to Web Based Applications.[18]

So, the main reason for IBM retaining the text interface is compatibility. For the rest of us, the fact that they're displayed very quickly with a lot less of resources (memory, data transfer speed, cpu cycles) needed when compared to a graphical UI is possibly of equal importance.

Concluding, the majority of information we humans consume is still text. We look at web pages, word processing documents and read PDF files in the digital world. Graphical UIs make it easier to fake screen output into looks like a book, with nice fonts, screen antialiasing and very high resolution displays like Apple's Retina Display, first introduced on the iOS platform. And it truly makes a difference! Reading long texts is easier from paper or such screens compared to a typewriter page. Or a monospaced terminal screen, be it 5250 or VT100. But reading long texts isn't what's usually be done in terminals.[19]

… regarding AS/400 forms and menus versus GUIs:

The only feature the AS/400 UI itself lacks is Copy & Paste. So by utilizing a terminal emulator on current GUI based desktop systems to connect to the AS/400 terminal session, one can benefit from the best of both worlds. Also, one may connect a PS/2-Mouse to an IBM 3486 terminal, also providing facilities for selecting and duplicating text.